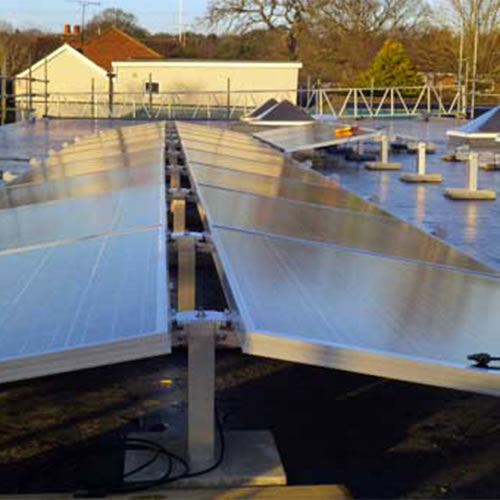 For installations on flat roofs, how about installing the system using an east/west orientation rather than south facing. Are there any benefits ?

It turns out that there are a number of benefits as follows;

Increased Yield: According to German manufacturer Renusol, an east / west system can generate around 30 percent more solar power than south-facing systems fitted to flat roofs of the same size. This is due to lower angles of inclination that allow the solar modules to be fitted without any gaps between the rows, meaning that roof space is put to full use. While south-facing solar installations require their rows of modules to be spaced further apart to avoid shadows being cast by the modules and causing yield losses, in east/west installations solar modules can be fitted more tightly together on roofs often at inclinations of around ten degrees.

This means that on a roof area of 12 x 30 metres, for example, 126 modules can be installed as opposed to 88. At a module output of 250 watts peak (Wp), the entire system produces an output of 31.5 kilowatts peak (kWp) in comparison with 22 kWp. The annual yield of an east/west installation is approximately 24,000 kilowatt hours (kWh), making it some 30 percent higher than that of south-facing systems, which only generate around 18,000 kWh of electricity a year.

Increased Self Consumption: In addition to the benefit of the additional annual yield, an east / west system will generate less of a peak at midday when energy demand is typically lower, but will see higher generation rates early in the morning and later in the evening when demand can often be higher.

Reduced Ballast Requirement: East / West systems tend to be interlocking such that the whole array becomes one big unit, and as such provide more resistance to wind. Therefore, for any given situation, less additional ballast is required to overcome the lift forces.

All of the above results in a system that generates more energy, increases self consumption, places less stress on the roof and uses less ballast. From a clients perspective this makes an east / west system more financially attractive.

There are a number of manufacturers supplying east / west systems and we have recently installed such a system from German manufacturer Renusol, namely the FS10 system,  at a school in Sandhurst. This 9kWp system, comprising 36 REC250W modules and occupying just 60m2, was installed in a single day and required no additional ballast.