June was a scorcher, one of the UK’s hottest ever. It led to solar power breaking all records and providing a quarter of the country’s electricity:

According to National Grid, days before on 26 May, Photovoltaic panels generated 8.7GW of demand, beating the previous high of 8.48GW.

It’s been a good year. Cast your mind back to March and Britain didn’t use coal to generate electricity for a whole day – a first since the 1880s.

In light of all this positive news, we caught up with one of Sogosolar’s customers, Dr Sethurajan to see how the family’s summer is going, and what life’s been like since their first installation over six years ago.

“We’re self-sufficient until around 4am for everything electrical from March to September.” – Dr Sethurajan, 47, London.

“We had our first solar set up in 2011. The tariffs were higher then but we saw how much you can generate and save. When we moved to a slightly larger property we
realised we could install a bigger array of solar panels and be more or less self-sufficient.
“We’re a family of four with two children aged 11 and 12. We run typical large appliances everyday including a fridge, freezer, washing machine, dishwasher, TVs,
computers – and a fish tank. We generate our own hot water from the solar and now have a hybrid car that plugs in too.

You just leave it alone and it does its thing
“We started with 12 panels on the garage roof and were actually producing more than we could use during the day, which was better than we expected.
“When we decided on a loft extension the scaffolding was already in place so we added a second set of panels.
“There was hardly any disruption during installation. It took a day to fix the panels and another day to connect the wiring, cabling, electronics and stuff to the main fuse board. The beauty is it’s also virtually maintenance free, it really is fit and forget. You just leave it alone and it does its thing.
“The kids see the solar panels, know why we’re running stuff during the day and how we’re trying to cut down on pollution and they love it, they think it’s normal, which is the way it should be.

No electricity bills for three quarters of the year
“We recently added a Tesla battery in our garage. The battery holds around 6kW, which is pretty much what we use at night.
“We’ve gone from generating solar energy, to generating our own electricity, to now storing and using it overnight. It’s a complete package. Environmentally, it’s great because the extra energy we generate during the day but don’t use goes back into the battery. When the sun goes down, the battery takes over. That means we’re self-sufficient until around 4am everyday for everything electrical from March to September.
“There’s no change to your experience as a user. Say the panels weren’t generating anything and the battery was flat, the system automatically takes electricity from the grid because we’re still connected. We don’t notice any difference except we’ve got no electricity bills for three quarters of the year.
We also get £300 to £400 a year guaranteed for 20 years from the government as the solar tariff but as well as that, save at least £70 a month on bills and consume
virtually no gas for most of the year.
“I don’t panic every time there’s a rise in gas or electricity prices and only go to a petrol station once a month since I’ve bought a hybrid car. I do a lot of stop start driving and with the hybrid the first 30 miles are all electric. It’s a silent ride and I really enjoy it. The kids think it’s cool.

To find out more on how a combined solar + battery system could work for you please call us on 0800 0025833 or email us at: info@sogosolar.co.uk 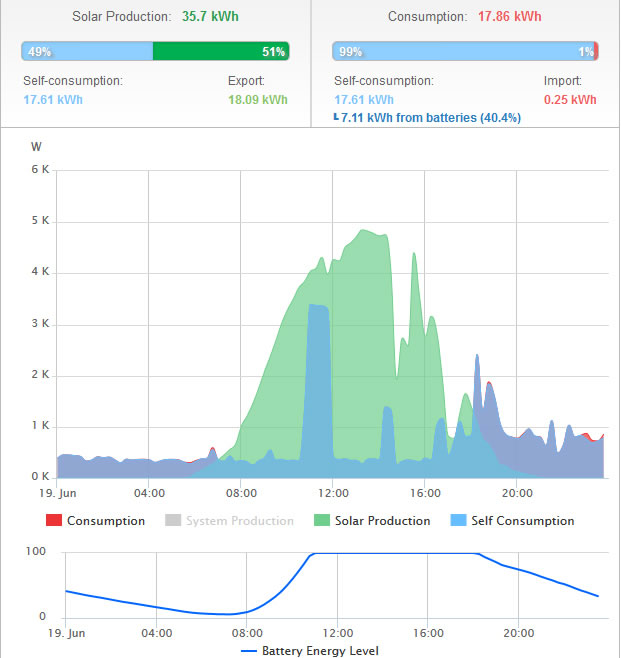 Energy production, consumption and generation at Dr Sethurajan’s home from midnight on 19 June to 23:59.

The property is 90% self sufficient during summer months. 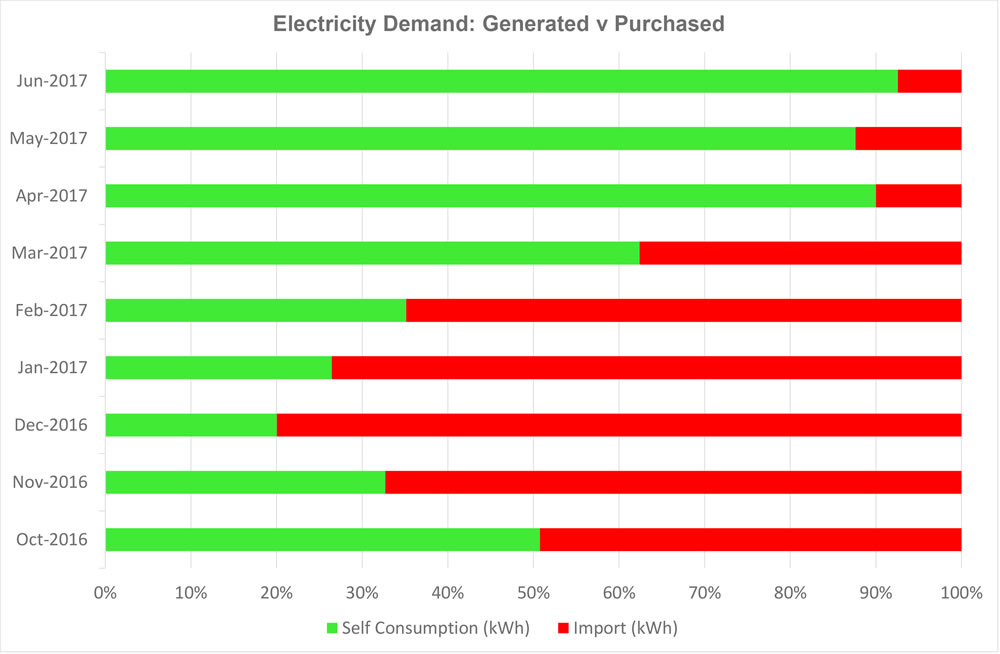 Click here to view our information sheet about this installation