In 2019, for the first time, more power was produced in Britain from zero carbon sources than from fossil fuels. National Grid reported that, over the year, 48.5% of the country’s power came from zero carbon sources, including: wind farms, solar, nuclear energy, and energy imported by subsea interconnectors. Fossil fuels, mostly gas, produced 43% and biomass the remaining 8.5%.

National Grid CEO John Pettigrew described this as “a historic moment” and underlined his organisation’s commitment to helping deliver a cleaner future and a safe and secure energy system that works for all.

In May solar power produced a record 9,550 MW, amounting to more than a quarter of the country’s electricity needs. On 10 December wind power, boosted by the tail end of Storm Atiyah, hit a new record of 17,342 MW, or 44% of Britain’s electricity needs.

Also in May, electricity was generated without coal for 437 hours, the longest period since the industrial revolution. The “greenest” day ever came on 17 August when carbon intensity was just 57gCO2/kWh.

In 1990 fossil fuels generated 75.5% of Britain’s electricity and zero carbon sources, then mainly nuclear, only 24.4%. Last year’s impressive performance is an encouraging step towards the ultimate aim of achieving net zero by 2050.

National Grid recently announced an investment of nearly £10bn in the gas and electricity networks over the next five years with £1bn of this sum allocated to transitioning the grid to net zero by 2025.

Below a recent installation, to find out more on this project, or how we can help you transition to renewable energy, call 0800 0025 833 or visit www.sogosolar.co.uk 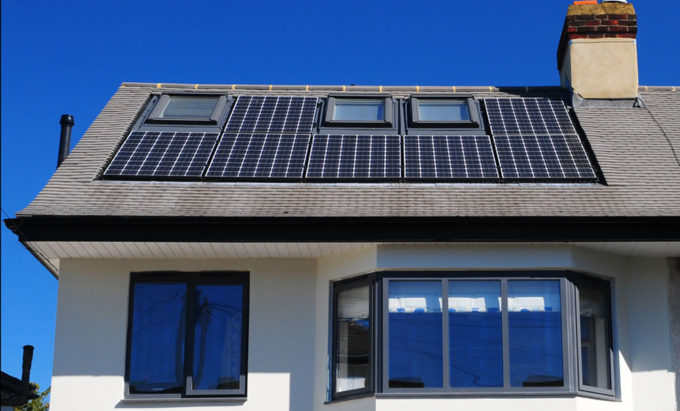